Click here to watch a livestream of the meeting tonight at 5:30pm

The proposed budget is based on funding projections from the Governor’s Revised State Budget in May. This budget revision suspends 2.3% COLA and reduces the LCFF funds by 10%. On June 3rd, the State Assembly and Senate rejected the Governor’s proposed budget citing several concerns including fully funding LCFF, ensuring districts are held harmless for ADA this coming school year, and increasing funding for Special Education. The Governor and the Senate must come to a compromise by June 15th. This will set budget parameters for local districts.

In the past, the District has not clearly communicated about their budget with the level of transparency our community expects. We are encouraged to see that with the new leadership of the CBO, some of our feedback has been incorporated as this presentation explicitly names the challenges ahead in easy-to-understand terms.

Here are a few challenges named by the District: 1) the budget was reduced by $16.5M 2) planning for COVID comeback is a constant evolution 3) the 2020-21 school year budget was drafted assuming school will open normally (see more on slide 15). To address these challenges, the District has begun to develop a plan for blended and distance learning in 2020-21, gather recommendations from the Board on how budget cuts should be made, and make strategic budget adjustments along the way.

The District anticipates revising its adopted budget once the state budget is adopted (see timeline below). 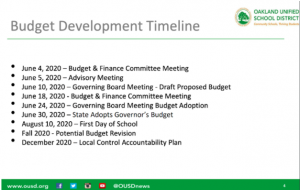 In 2019, the Black Organizing Project (BOP), a Black member-led community organization working for racial, social, and economic justice through grassroots organizing and community-building in Oakland, brought forward People’s Plan for Police-Free Schools, an implementation plan that calls for the District to reinvest the school police budget into supports for the whole child and students with disabilities by 2020. According to the BOP plan, since the 2015-16 School Year, Black students made up 26% of the enrollment and yet made up 73% of arrests, accounting for 3 out 4 of the arrests in our schools, and in the last four years there were over 9,000 calls for service to the police on students.

Currently, OUSD is the only school district in Alameda County with its own internal police department. The Oakland Schools Police Department includes both sworn officers and non-sworn employees such as school safety officers. Since its inception, the department has faced a number of controversies, including the 2011 fatal shooting of Raheim Brown near Skyline High School. Since 2016, OUSD police have been provided with SEL training (social emotional learning) that aimed to train cops to better understand people’s situations and actions.

During a recent board meeting budget cuts discussion, BOP resurfaced the plan to eliminate the District’s police department by reinvesting $2.3M into nurses, restorative justice, and counselors. The Board voted against Director Torres’ amendment to remove 3 of the 7 sworn police officers next school year 2020-21, asking instead for Superintendent Johnson-Trammell to come forward with a safety plan for how the district could eliminate the district police in the future by September 2020.

Since then, the urgency to address the systemic racism and violence has become even more imperative with the unjust murder of George Floyd and so many others, especially black men and boys. Board members Shanthi Gonzales and Roseann Torres will be bringing forward the George Floyd Resolution to Eliminate the Oakland Schools Police Department. The proposed resolution would eliminate the Department and the sworn officers. It would direct the Superintendent to reallocate funds previously used for sworn police officers toward student support positions such as school-based social workers, psychologists, restorative justice practitioners, or other mental or behavioral health professionals, as the budget supports, to meet the needs of students. It would also direct the Superintendent to launch an inclusive, community-driven process no later than July 17, 2020 to complete a revised District safety plan with strategies for enhancing student learning, safety, and well-being within the District.

Superintendent Kyla Johnson-Trammell also announced that during the earlier portion of the meeting she will be discussing her latest thinking about the District having its own police department, and what her vision of that department is going forward.