Thanks for checking out Board Watch. You all might already know me as GO Oakland’s Political Director. With each edition of Board Watch, I’ll be bringing you the latest on policies, budget, and the board directors responsible for managing it all. Feel free to share your thoughts and feedback with me. Let’s build a movement for quality schools together.

Click here to watch a livestream of the meeting tonight at 5:30pm

Board Vice President Sam Davis and Director Aimee Eng have proposed a resolution that would further delay Cohort 3 from September 2021 to September 2022 and delay any merger and/or closure to Fall 2023 (as opposed to Fall 2022). Additionally, the Resolution states that, as between merger and closures, the Superintendent shall recommend mergers where possible and closures if necessary. The Resolution further requests additional analysis and directs that community engagement efforts should begin in January 2022.

As the Citywide Plan states, this Resolution directs the Superintendent to present proposed budget reductions for Board action by October and to present additional budget analysis. Lastly, the Resolution also commits the Board to finding and approving budget solutions for the 2022-23 and 2023-24 fiscal years to ensure the long-term fiscal solvency of the District by adopting budget-balancing solutions by the adoption of the 2022-23 budget.

There are major fiscal impacts with this resolution:

We understand and agree with the need to focus on the safety of our community first and foremost. Postponing the cohort 3 decisions until we have a plan in place for the health of students and staff should be prioritized. However, delaying this decision until Fall 2022 may come with sacrifice. With OUSD’s looming structural deficit, and declining enrollment the board needs to address cohort 3 decisions by the end of the year. Delaying means less time for the school redesign and one of the key lessons we learned from cohorts 1 and 2 is that time to design and build a culture across campuses is critical for a successful merger.

COVID Safety Updates:
Cases continue to decline. As of September 13th, there were 14 reported weekly cases among students across OUSD campuses and 4 cases reported among staff.

Enrollment and attendance:
As the year progresses we are getting a clearer picture of the impact of the pandemic on OUSD’s student enrollment. OUSD is currently reporting a loss of almost 1,000 students. Added to last year’s enrollment decline of over 600 calls into question the severity of the district’s structural deficit and the urgency to prioritize long-term fiscal sustainability. 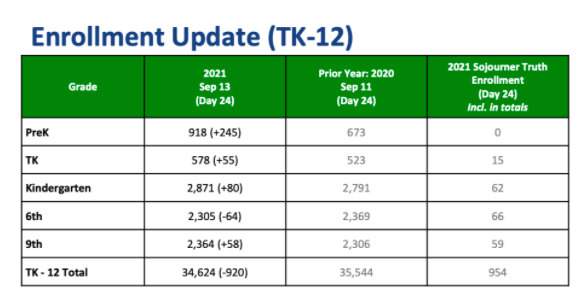 Overall absences have gone up this year. When a student is at home due to quarantine, currently California considers this an absence from school even if the student is able to participate in class(es) virtually.

OUSD may be the first Bay Area school district to mandate student vaccinations.

In the last Board meeting, Board Vice President Sam Davis, and Board Directors Clifford Thompson, and Gary Yee introduced a resolution that will require all students, aged 12 and over, to be fully vaccinated against COVID-19 unless prohibited by law. Tonight, the Board will vote on the resolution.

The resolutions directs the Superintendent to:

Students who do not want to get the vaccine and do not opt to enroll in Sojourner Truth, the District’s designated remote learning school, may ultimately be unenrolled from the District. Exceptions such as a physician’s  recommendation against vaccination based on medical circumstances will be considered.

There is a medical and scientific consensus that the best way to protect everyone in our school and communities is a combination of masking and vaccinations.  However, whether or not a district should require vaccinations is in question. Although a majority of the school board members support the proposal, District 5 school board director Mike Hutchinson shared his concern about OUSD making this decision without state and county guidance.

“There’s need to be more advocacy at the state level and the mandate needs to come from them,” Director Hutchinson said when asked what he thought about the resolution.

If approved, OUSD would be the third school district in the state of California to mandate student vaccinations. With Los Angeles Unified and Culver city school districts being the first and second. Opponents in Los Angeles. have already filed litigation over the mandate. LAUSD officials have stated that they are willing to face legal challenges over the protection and safety of its students.

If the board does move forward with this decision, they must do so with equity at the center and recognize that Oakland’s underrepresented communities remain the least vaccinated and efforts to educate and provide access to them should be a priority. 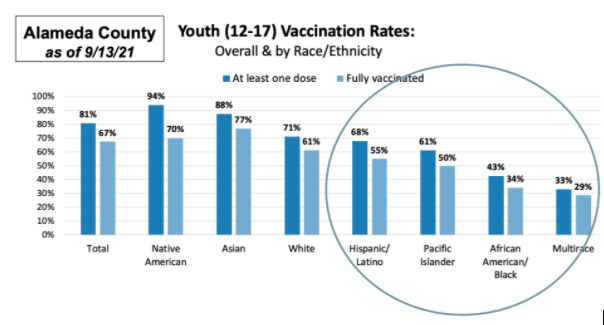